We got into La Paz early and tired. Our cab took us to the wrong hostel before some maps.me and a translator got us headed to the right address. There are two hostels in La Paz with very similar names so it was an honest mistake. The Adventure Brew Hostel Downtown was our home for 4 nights in La Paz and it was great. Our roommates Jake and Bec a couple from Wales and Australia respectively were signing up for Death Road the next day which is what we wanted to do so that worked our perfectly. We even got a small deal because we attacked the travel agent in numbers. We signed up with Barracuda and were set to go the next morning at 7:30. 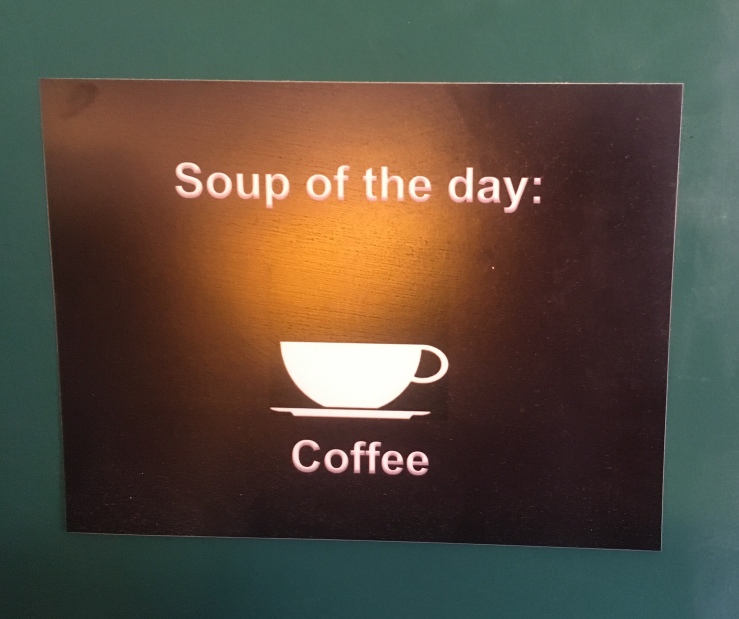 After signing up we went to visit the infamous prison that is located in the heart of downtown La Paz, San Pedro prison. If you’ve ever read Marching Powder, it is the main book that brought the prison so much interest from tourists and travellers. Though we were told, since the book was released they don’t let travellers take tours inside the prison anymore. So outside the prison there is a lesser known fellow named “Crazy Dave” and if anything the nickname is an understatement, he does a little walking tour everyday at 1pm. Becca and I heard about him from a guy during our Spanish lessons and thought “why not”, luckily we convinced Bec and Jake to come with us. Over the 2 hours we were with Crazy Dave, I heard about 25% of what he was saying, the other 75% was a strange whisper he did while starring right into your chest. It was a slightly uncomfortable situation but there were 7 of us and 1 of him if things got spicy.

After that little talk we went into the witches market (not as witchy as described, no “eye of newt” in glass jars). That didn’t stop Becca and I from doing some pretty good souvenir shopping. Our hostel was also located on a great street with an awesome cafe across the walkway that we ended up visiting at least once each day of our La Paz stay. There was also a very tasty Mexican restaurant (I know very cultured we are) that we enjoyed lunch at. All the food in La Paz was great and the best restaurant was yet to come. That night we had some beers in the hostel and played foosball with Bec and Jake until it was time for bed to rest up for THE DEATH ROAD!

The early morning was well, early but once we had shaken all of the sand out of our eyes and realized we were on the bus to Death Road we all got very excited. The bus ride takes you up to 4600masl where you get all of your protective gear (a helmet and gloves). Also as a safety measure we each did a small offering to Mother Earth by pouring a little 95% alcohol first onto the ground, then our bikes, and then to my displeasure down our throats. Boy is that a way to start your day, it felt like paint remover, I can honestly say I felt a small hole burn through my stomach…

Once the burning subsided we were off! We got lucky and had an Argentinian tourism film group with us for the whole day so if anyone is in Argentina in about 2 months, turn on the tube at 7pm on Saturday and you’ll see Becca and my pretty faces on TV! The first 22km of the trip is on asphalt so you can get used to the bike, the downhill and the cold. Unfortunately one of the guys on our trip didn’t quite master the brakes and was seen slamming the front brakes which caused him to shoot over the handle bars and land hard. His tour ended before our first break which was only 5km down the road. He is all good though we last heard that he dislocated his elbow. If anything that made everyone on the trip ride a bit slower… for about 10km.

At one stop we got back on the bus because there is an 8km uphill and we’re all out of shape tourists so they let us ride the bus up that crazy hill. Then you see it, a big yellow sign that says “Welcome to Death Road” and the real fun begins. The road is big enough and we all felt pretty good but it is wild to be able to look over the unprotected edge of the road and see a 1000m drop, the guides later informed us that they only had a 300m rope, so that was reassuring. On bikes it feels safe but it is hard to imagine the car traffic trying to pass each other. For an example please refer to the Top Gear episode where they are in Bolivia, Jeremy Clarkson and a car have a close encounter and we ate lunch at that exact spot! It was also hard to not notice the dozens of crosses that have been placed where accidents have occurred.

The bike ride itself was amazing, the views were crazy, the whole valley is surrounded by mountains and lush green tropical plants. I heard 2 people independently say it was one of the most beautiful places they had ever been, and both were quite well travelled. At one point it stopped being terrifying and became just an amazing experience and total joy. One of my favourite days of the trip by far. 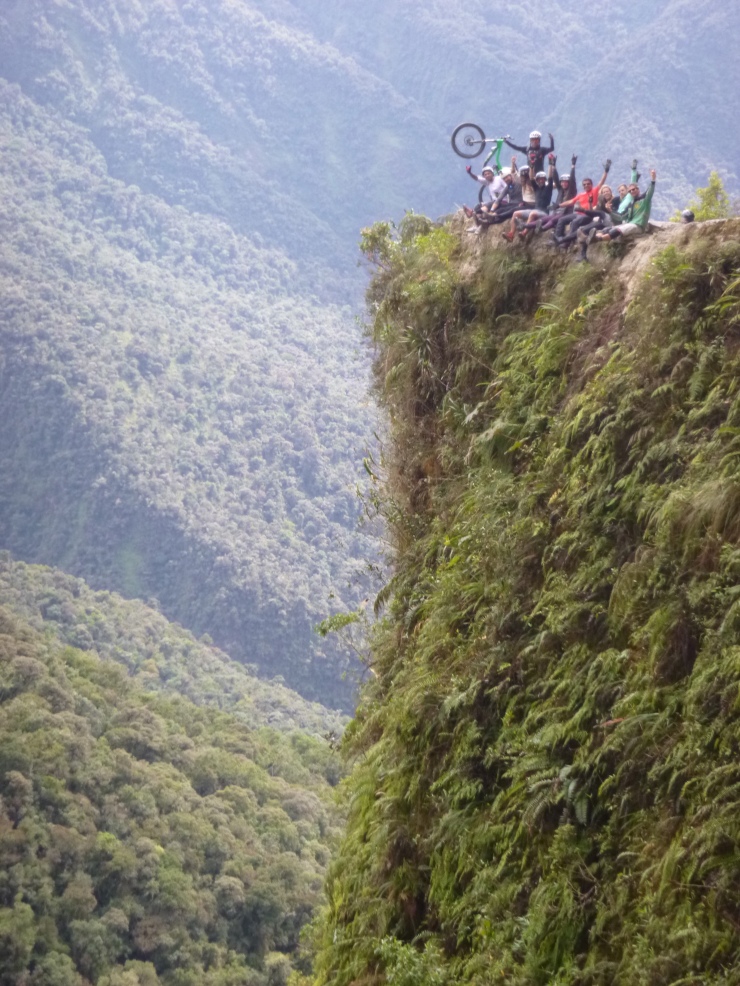 It also helped that at the bottom of the ride the hostel we stop at had a pool and cold beer. We hung out at this great spot for a couple hours and enjoyed hot showers and an amazing buffet lunch. The drive back to La Paz on the new highway that has been put in to reduce traffic on death road was only slightly less scary than death road itself, it might have helped that we had some beers on the bus with us to calm our nerves!

– before the new highway was in place there were approximately 350 deaths per year on the road.

– One man sadly lost most of his family in a crash and took it upon himself to stand on the corner they crashed to direct traffic, he became the first “human traffic light” on death road.

– After the new highway was constructed, there were 2 days it was impassable due to landslides and Death Road was reopened to normal traffic. In those 2 days there were 2 accidents, luckily no deaths.

– There have been tourist deaths on the biking tours, there is even a corner named “Italian corner” after a guest who unfortunately didn’t brake enough heading into a 180 degree turn.

Though there are some negatives, the tour itself was very well organized, Becca and I felt safe the whole time and there is no pressure to go speedy. There is always a guide at the back to help slower bikers and one at the front who is a machine and would crush any tourist in a race. 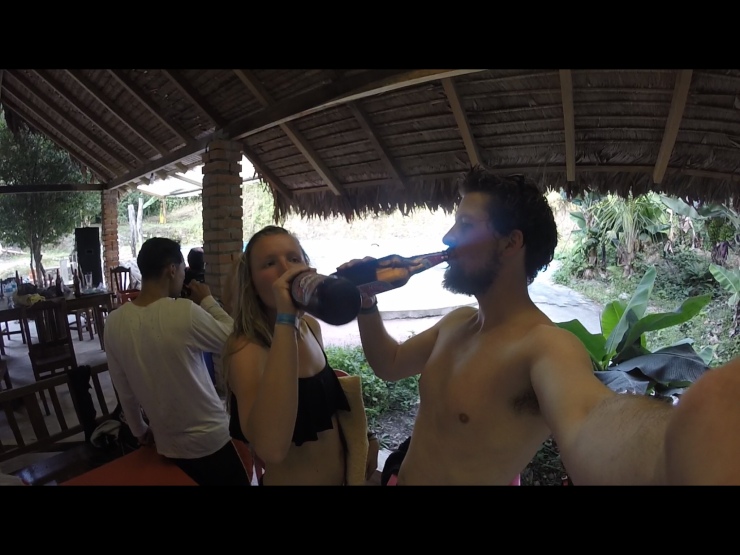